I don't often remember my dreams, but the other night I had two vivid ones.  In the first, I was moving across campus of my alma mater to a northside dorm. I was hauling my pillow and other things down the sidewalk. While doing this I was bit by a raccoon, which refused to let go.  I was not hurt or scared by this in my dream, but rather annoyed.  Bizarre.

The other dream was not bizarre, rather, it was beautiful.

I was outside somewhere with Bug and he was jumping. He was effortlessly jumping on the sidewalk, with feet clearly above the ground in perfect preschooler jumping form. He was smiling and having a wonderful time. In my dream I remember thinking, "He is jumping!" amazed at this new skill, and then simultaneously in my dream I was thinking this was how it always had been.  I woke up in the morning vaguely remembering the jumping dream, but vividly remembering that stupid raccoon.

But then I was working with Bugaboo on the therapy ball and the stepstool, and my dream came rushing back to me.My child who cannot jump, even though he's been working on it for such a long time, had been delighted to jump in my dream.  He was beautiful and free and unhindered by cerebral palsy and autism. 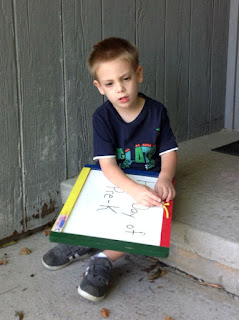 I do not know what to do with that dream which on one hand brought me such joy, but now in the daylight makes me weep.  Someday Bug will run and jump and play in all the ways we were designed to because someday we will live in a land of no disease or sadness or sin. And it will be glorious.
Posted by Amanda MacB at 10:09 PM No comments: Links to this post

Our life in smartphone pictures (weeks 27 -?)

This is how the MacB family spent their summer vacation (via smartphone pictures):

We went to Silver Dollar City and learned that I cannot handle spinning rides at all any more.  Here is our last family teacup ride selfie. 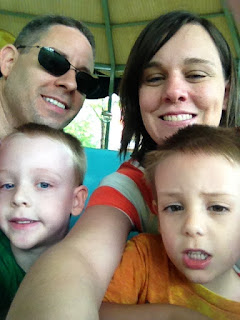 At Dream Night at the zoo, the boys got to meet some StarWars characters.  They also were able to pet some creepy animals, and I managed to help Bugaboo pet things that I normally would avoid. 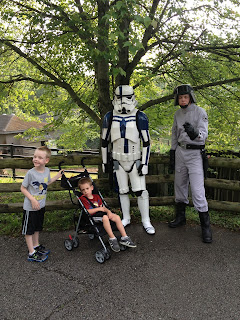 The boys went to Illinois for a few days, so The Hubs and I actually got a couple of date nights in. 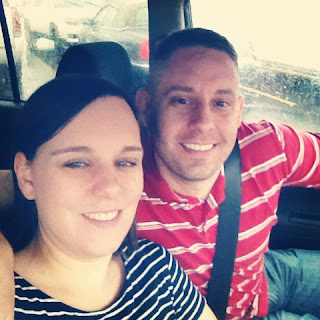 Here's Bubby and Bugaboo enjoying the best ice cream ever - which happens to be in my hometown. 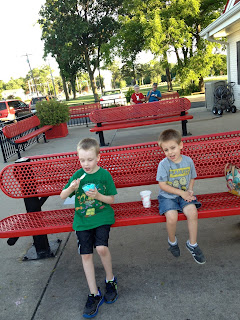 We discovered the awesomeness that is corn on the cob grilled with olive oil, salt and pepper. 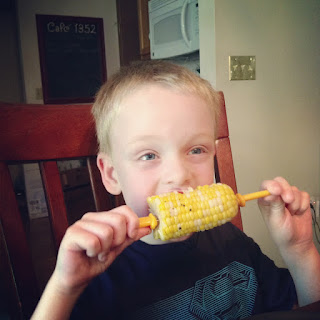 Bubby and I took turns being sick for a big part of the month of July. It also rained quite a bit, so we had to find indoor activities.  Here is one of them: 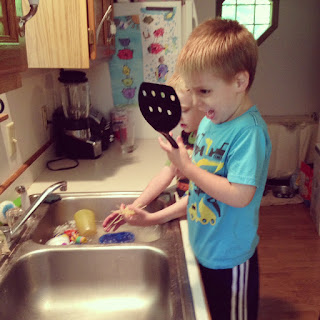 Our third year going to our local 4th of July parade. 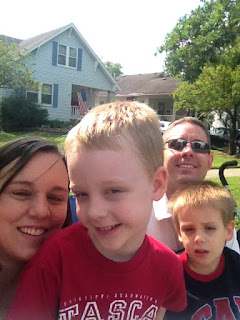 Took the boys roller skating with our co-op. It was Bubby's second time (though it has been a few years) and Bug's first time.  Bug did not enjoy it at all, but we tried! Bubby started getting the hang of it, especially on the carpeted areas. 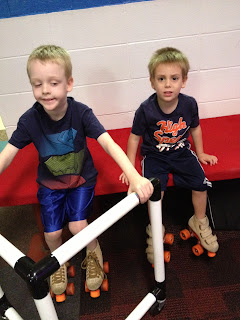 Bubby went to a soccer camp and a basketball camp here in town. At soccer camp he earned the "Most Christlike" award. I'm not sure if it is Christlike for me to be proud of him for that, but I hope it is. 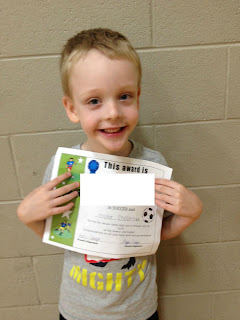 The boys went to two VBS programs this summer. It was Bug's first time to go to one that wasn't at our church, and it was also his first time being out of the nursery VBS program at our church. He did well at both programs, and I am so thankful for the volunteers who made it possible for him to attend. I am also worn out from teaching third and fourth graders this week. Hard to believe I used to teach fourth graders all day every day. 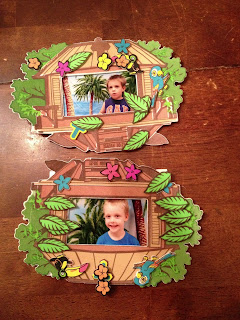 Bubby starts first grade in a little over a week. So even though there is still a month left of summer, we are getting started with our modified year-round schedule. Looking forward to the weeks ahead of us!

Posted by Amanda MacB at 9:03 PM No comments: Links to this post

1.
My word for 2015 is hope. I haven't written much about this word because I haven't been sure why it is my word this year. Am I going to be given renewed hope? Am I supposed to look for hope? Keep hoping? And for what am I allowed to hope?

Hope is a scary thing for me because many things for which I have hoped have not happened. People change, diagnosis remain unchanged, situations disappoint, and I am left frustrated and confused. Yet my word for the year is hope.

It stands out these days when I read it in a verse, hear it in a song, or notice it as a theme. But I don't feel like I personally grasp it. Some days hope feels like sand, slipping between my fingers as I try to hold onto it.


2.
A number of years ago, a Christian counselor told me to "fake it till you make it." It was some of the worst advice I've ever received. What happens when you fake it and you don't make it? What happens when you try so hard to be what people need you to be and it destroys your heart and soul in the process? Isn't honestly the best policy? Wouldn't it be less destructive to say, I cannot be what you want me to be at this time or maybe ever, and deal with the consequences of that mess rather than realize months later that you were wrong. That you can't handle the emotional and spiritual pain of a situation, so you will not be faking anything, even to keep the peace (which in itself is fake peace)? The fake it till you make it philosophy felt hopeless because I never ended up making it.


3.
When it rains or it shines on this pillow of mine
I will lift up my head to the sky
So I have chance to see where my hope has come from
Know there's nothing that I can't abide


5.
Without Jesus, my dad will never change. Nothing anyone can do will turn him into the person he should be. It is hopeless, and no amount of pretending can make it better. I can't make people want me to be in their family, and that feels pretty hopeless if I dwell on that.

But my hope isn't in a relationship with my dad. My identity isn't found in his acceptance or rejection of me as his child. There is hope for a hopeless me, and it isn't in circumstances but in salvation. I can have hope this year because I have been accepted by the author of Hope.


Posted by Amanda MacB at 1:26 AM 2 comments: Links to this post