what parenting keeps teaching me about grace

On Mother's Day night I did not want to read the next chapter at bedtime. And so I didn't. This may not seem like a big deal, but we have a routine. Bible story, prayer, chapter from a book. But it was Mother's Day, and I just wanted the night off from that last step of the evening. The strange thing is, Bug, who loves his routine, handled it better than Bubby. That "your the best mommy" compliment i had heard all day...vanished at eight o'clock.

The next morning, Bubby was up and all was forgiven. Not a word was said about the missed story. The day's events went on as usual, until at one point my oldest realized we didn't go to an extra activity that was on our calendar. It wasn't possible for a few reasons, and honestly, I didn't think Bubby even really knew about the event. But a few hours after the time of the event, he asked me when it was, and I had to tell him we missed it. He handled the disappointment well, probably better than I would have if the situation was reversed.

But then last night I heard tossing and turning in his bed at about nine. I thought he was having a bad dream, but he was still awake. Bubby was tossing about in anger and sadness about missing our activity. We sat on the couch, and I acknowledged his sadness. I apologized. He easily accepted my apology and went back to bed. Once again, I felt like I had failed him.

Each day there are moments when I wonder how much I am screwing up. There are things I know that I do well in mothering, but it's these little things, often the things that are difficult to avoid, that fill me with fear. I don't worry about not being my kids' friend, but I do worry about disappointing them. At the end of the day I don't spend time remembering the pictures we painted together, the bubbles I blew, the bike riding I supervised, or the books I read. I remember instead the fact that I was cranky when someone didn't hold my hand in the parking lot. Or that I put them to bed twenty minutes early because I just craved a little bit of quiet. I focus on the one thing (or two or three things) that I didn't get right that day and beat myself up over it instead of looking at the whole picture. I am a perfectionist in many areas of my life.  However, perfectionism has no place in parenting.

I need that tattooed on my arm. Perfectionism has no place in parenting. It will only lead to frustration, disappointment, or worse. I am called to do the best I can with what I have been given, acknowledge and apologize for my mistakes, and leave the rest in God's hands. That last part is where I struggle. I want to get it right. I don't want to need grace as much as I do. I don't want my parenting to need grace as much as it does. 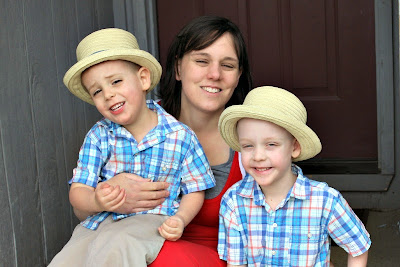 My children are the best at extending grace. They really are. I sincerely ask for forgiveness, and they extend it. Each morning this week Bubby hasn't remembered the sadness from the night before. He doesn't hold it over my head that he didn't get to do what he wanted. Each morning he is just ready to continue being my son, not even contemplating that something had the potential to change between us. He gives and receives love so freely.

Grace baffles me. I am thankful for it, but I don't always understand how it is possible. But then each morning I see two little boys in Ninja Turtle and puppy-dog pajamas, and I get a glimpse of what grace is and how it works.

Email ThisBlogThis!Share to TwitterShare to FacebookShare to Pinterest
Labels: grace, mommy-ing, The Journey