This Week In (smartphone) Pictures - Week 3

Some highlights from the pictures I took with my phone this week. Not high quality photos but always high quality memories.

Early in the week Bugaboo figured out how to completely open the refrigerator door without any assistance. He was quite pleased with himself. And as much as I don't want my almost-four-year old in the fridge, I am pretty please he finally has the hand grip and the muscle strength to open it. ("Take that, cerebral palsy!" is what I imagine Bug is saying here.) 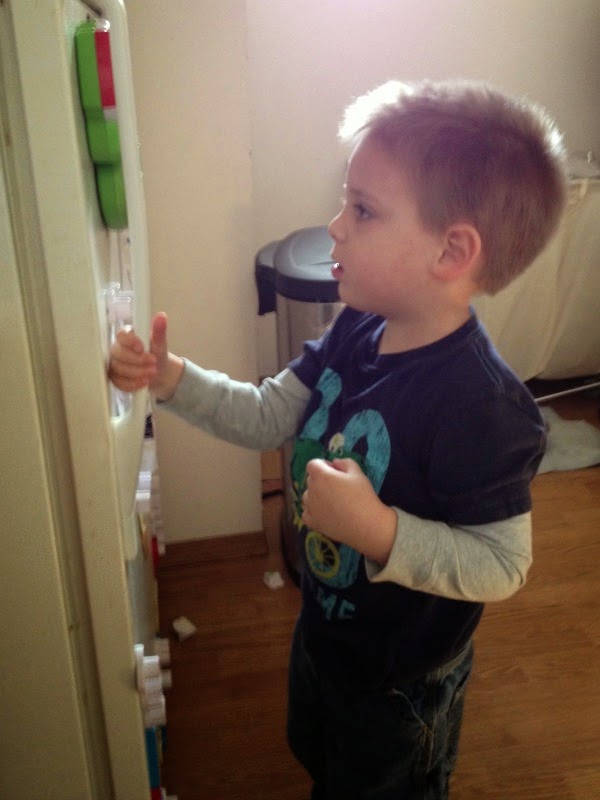 Thanksgiving week at the "school" Bubby goes to once a week.  He informed me on the ca ride home, "I painted camel hair on my vest. I wanted to be like John the Baptist." Such a funny kid. 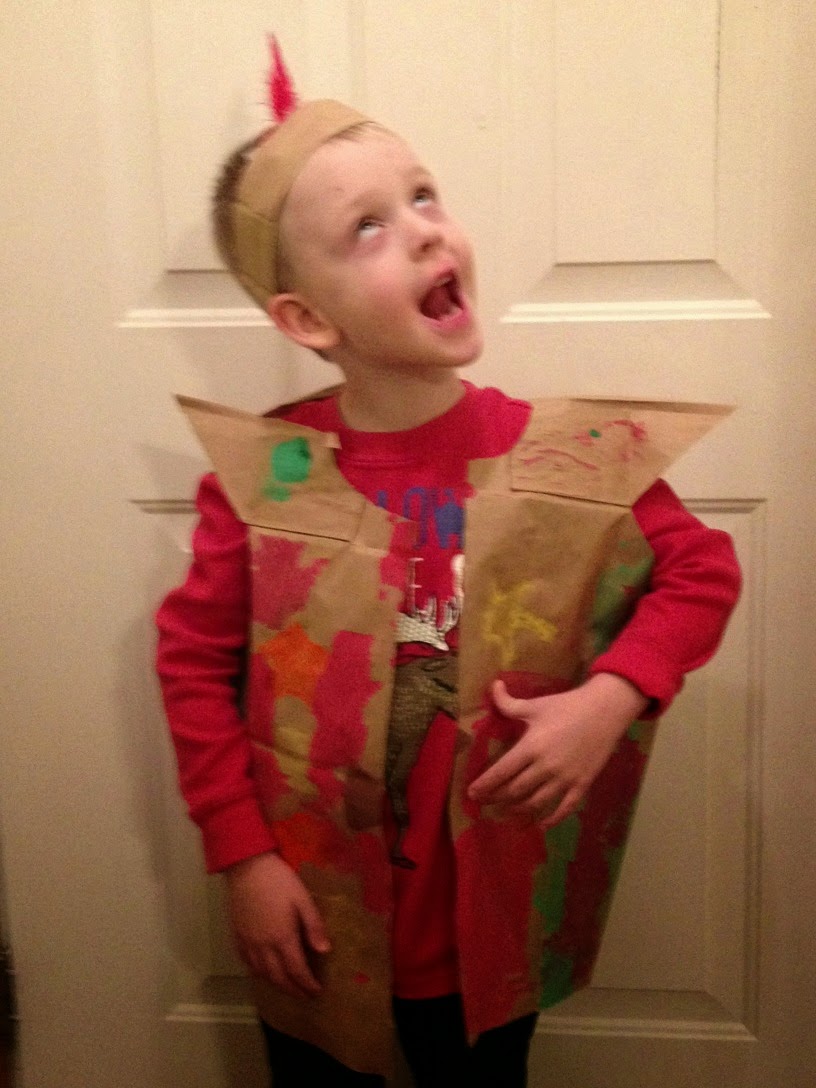 Here's Bubby when he took off his Spider-Man hat, which he insisted on wearing even after the weather warmed up a bit. Holy static-electricity-hat-hair, Batman! 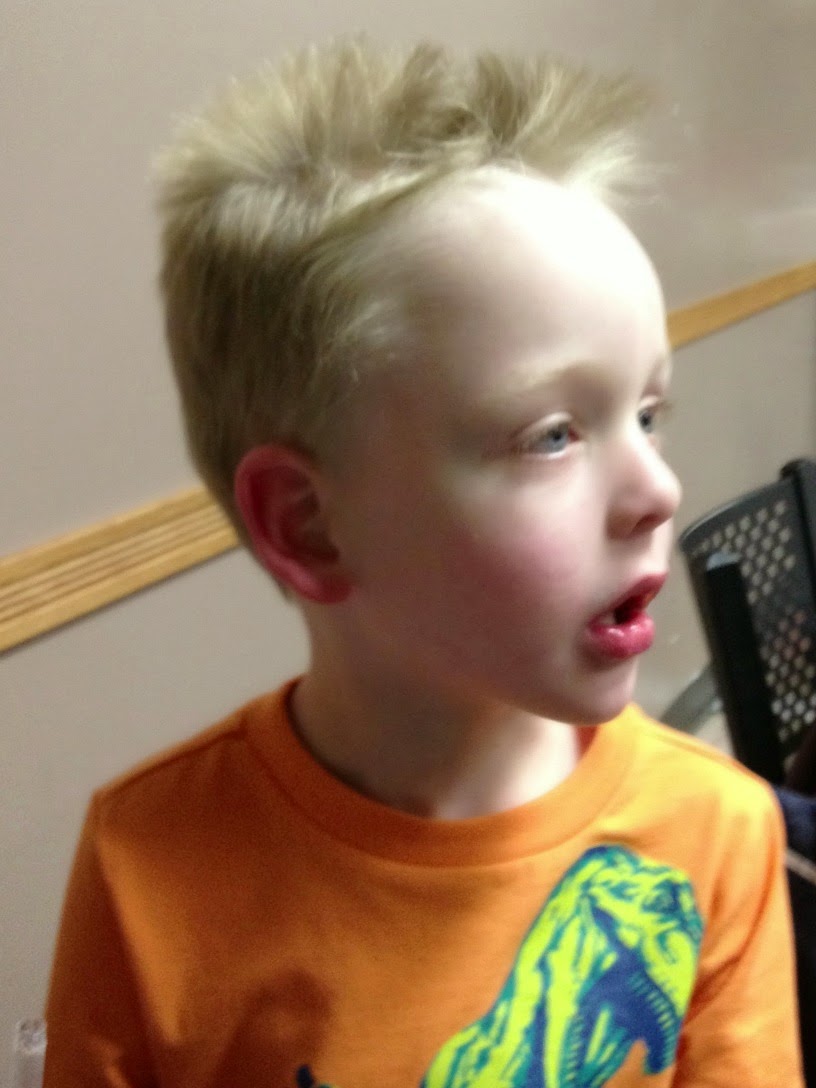 Speaking of hair, Bubby insisted on brushing my hair one afternoon. It wasn't quite as relaxing as going to the my stylist, but as long as he doesn't get the scissors out while he is brushing, it's not so bad. 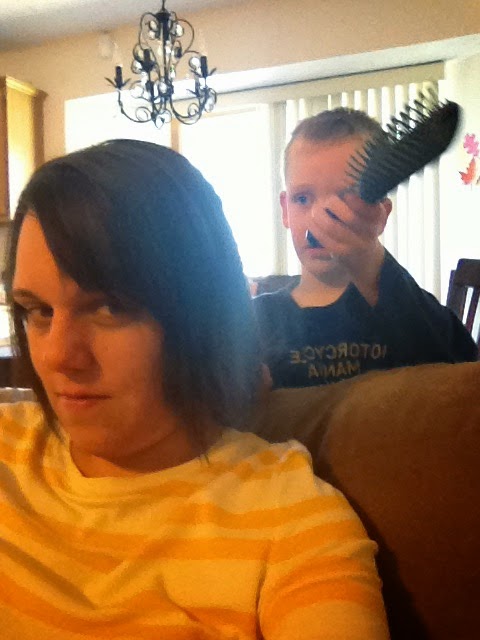 It was Stone Soup week here. and Bubby enjoyed both versions of the story that we read. I did realize making stone soup isn't really a homeschool friendly activity since we would be bringing all of the ingredients.  Instead we had a neat stone soup playset from the library and Bubby "designed" and cut out most of his own paper vegetables and used just a little bit of glue. 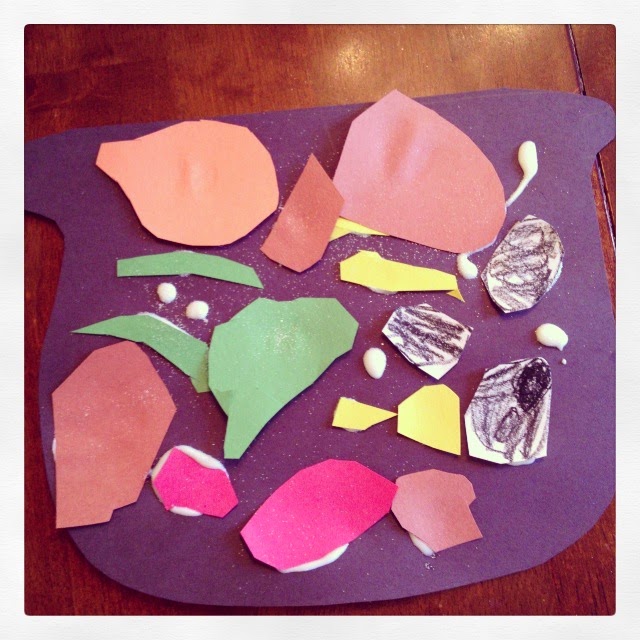 These boys had to sit in front of a few hours of PBS kids one afternoon this week while I was so incredibly sick for about 24 hours and The Hubs had to go to his counseling job.  Bug insisted on giving his big brother a hug and climbing all over him. Luckily Bubby is pretty patient when it comes to this.  The best part is in this picture Bug is saying, "Squeeeeeeze!" 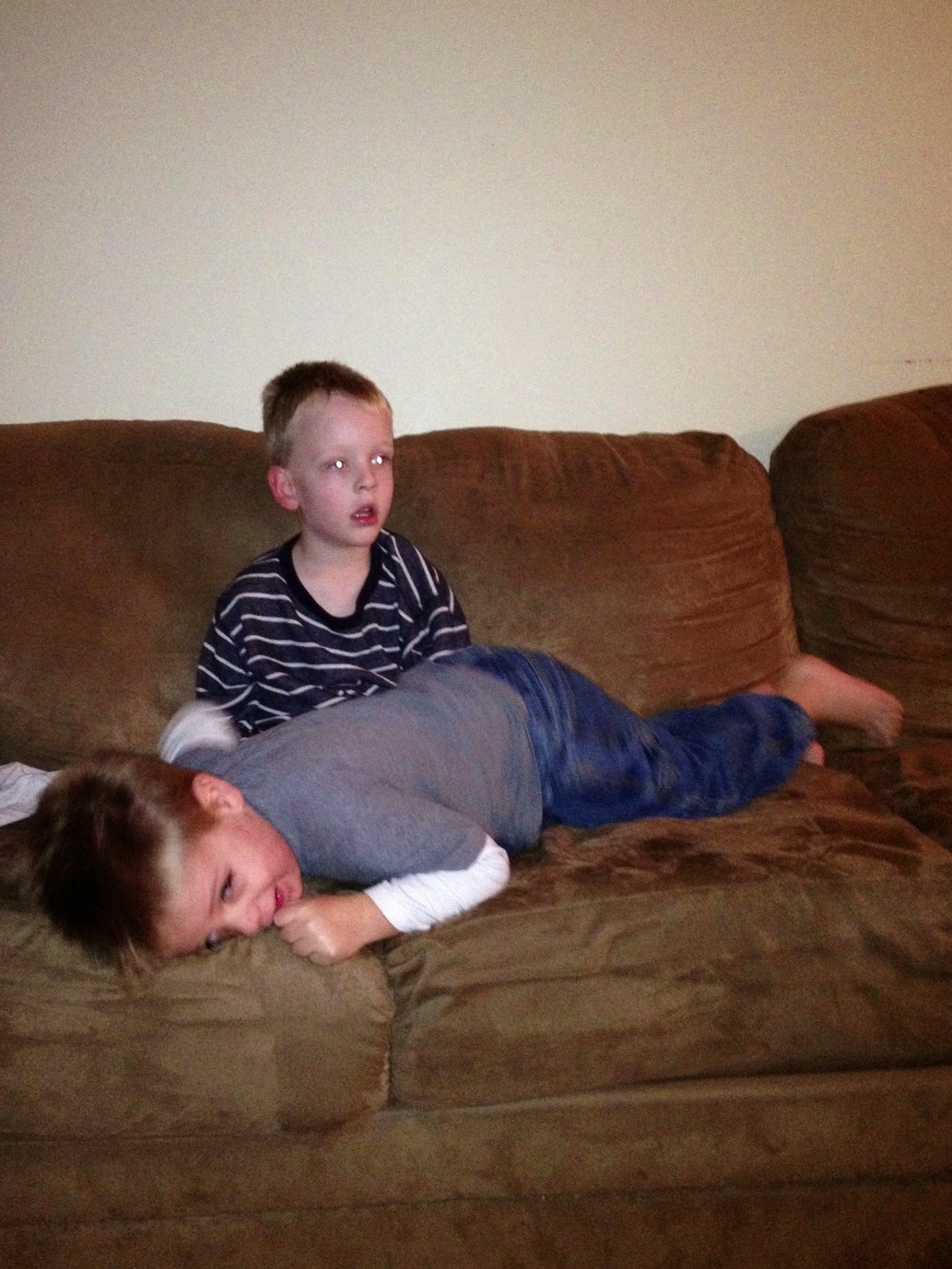 Bubby is almost done with his reading curriculum for the year, so I ordered him the next level plus the pre-reading program for Bugaboo.  You can request box art from this company, which is a fun bonus.  Bug has already looked through my new teaching manual countless times, reading off the letters and their sounds. I hope he enjoys his pages as much as he has enjoyed mine! He also enjoyed climbing on the box. 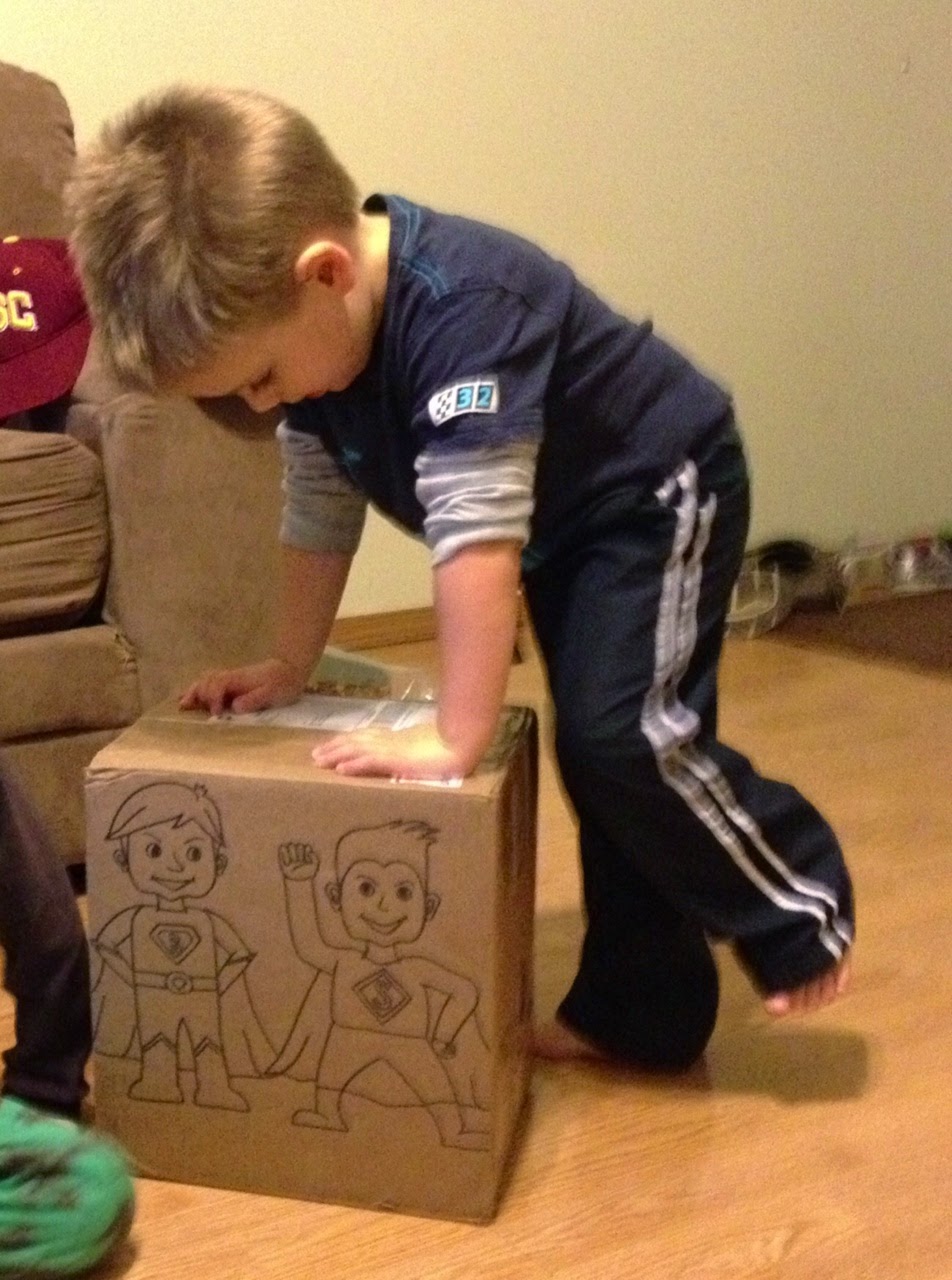 Legos are a favorite around here.  Today Bubby decided to make Lego Robin a car "because he didn't have a vehicle."  Bubby also pointed out that there wasn't room for Robin to park his car in the BatCave though. 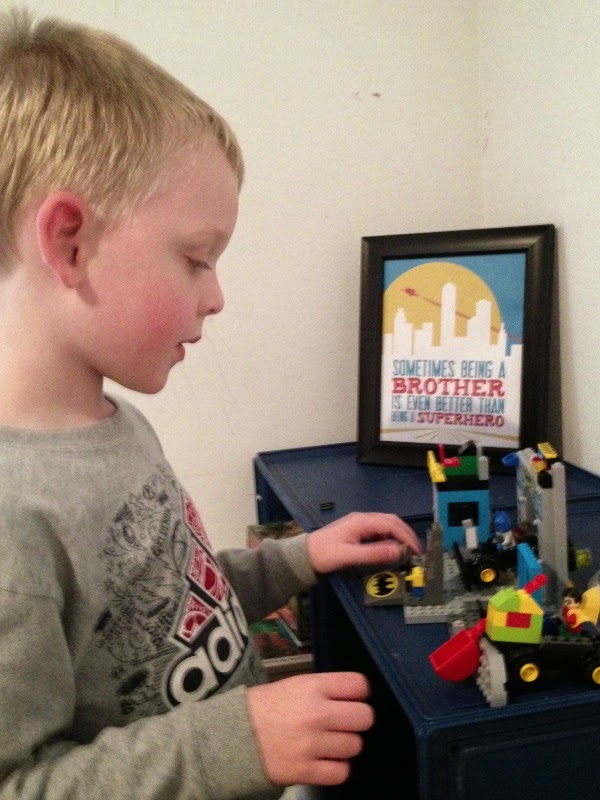