Sometimes when Bugaboo is sleeping, I wonder what it would be like if he woke up able to converse and use a spoon effectively and quickly climb the playground equipment. Mostly I stay stuck on the wondering what it would be like to have a typical three and a half year old conversation with him.

What funny things would he say? Would he tell me all about his day at preschool or would he just answer,"Good," and "Nothing,"  like Bubby used to do on his ride home? Would I be learning about the things that make him happy and sad and angry and scared? Would he ask me lots of questions, too? I picture it like a Sleeping Beauty coming awake or Dorothy returning from her trip to Oz - the discovery of his ability to really communicate. It would be an amazing and beautiful thing.

A group the boys and I attend weekly is pushing Bug back to an even younger class than what he was originally assigned. I got the call about it this weekend, and even though I knew it was coming, it still broke my heart. He understands what is going on in the stories and activities; he just doesn't react or engage the same way the other preschoolers do. He loves going to class. I watch him at his Cubbies group at church each week.  He knows all of the kids names and who is missing. He memorizes his verse, and at home I overhear him singing the songs. But game time is hard for so many reasons. I helped him through his first "friend" birthday party he was invited to.  I was thrilled he was included, but intimidated by it, too.  He did well with assistance, and he had a good time even though his time looked different than the other preschoolers' time. I love how he is included at church and with our friends, but it is emotionally difficult to see all the things he still can't do and may never do.

Tonight after watching big brother play in his soccer game, Bugaboo said on the ride home, "Thank you for taking me to soccer. I had a good time at soccer." (Bug's newest phrases are "Thank you for _____" or "I had a good time at ______" if we do something he likes.)  I love that him telling us that meant that he liked (or at least didn't mind) going to sit and watch Bubby's soccer game. Yet it made me want to cry my eyes out. Will he ever get to participate in soccer? Will he ever go to a friend party without his mom or big brother helping him or without him being content to just wander away from the other kids?  The cerebral palsy motor issues plus his other struggles seem to be a double whammy against him for things like that. 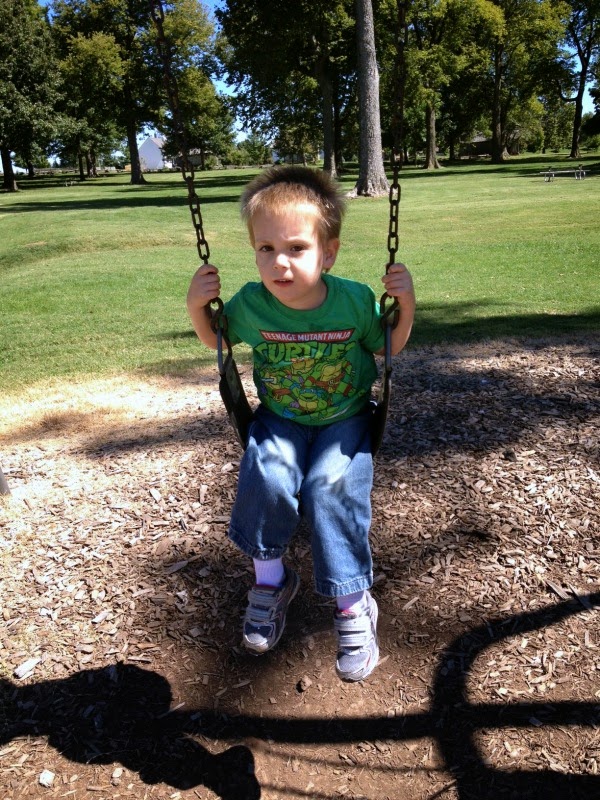 We celebrate him using a spoon with his cereal. We celebrate him balancing for a moment on the big boy swing. But there's so much out there we haven't even begun to really tackle yet, and quite frankly it is overwhelming.   We have good days and we have hard days and everything in between. Somehow we keeping putting one foot in front of the other, sometimes with tears but usually with a smile on our faces. He seems happy - other than when he's having a meltdown about something, of course. But on our good days he is easy going (especially if we stick to the routine), snuggly, and happy with the life he is living.