a little bit about the brothers these days

There have been new challenges where Bugaboo is concerned over the last few months.  It's hard to explain. One would have to be in our house for a day or two to really get a better picture of it. A big portion is unexplained crying/meltdowns.  This has finally decreased in the last month after we took a recommendation from our pediatrician after researching and weighing the pros and cons.  It hasn't been a miracle solution by any means, but it has definitely helped.

His words and phrases are increasing, which is a good thing, but communication is still a struggle.  He can answer uncomplicated/familiar questions, but he cannot carry on a conversation with you or tell you a story like a "typical" three year old. He has lots of lists, he will sing songs (not with you and most of the time not to you - but on his own terms), and his favorite things right now are books. Each morning he wakes up, he sits on his bed and gets books from a pile beside his bed or from his bookshelf. He "reads" through them, flipping pages, saying what he sees, sometimes saying a phrase from the book. We have also found that giving him time with his books when he is in meltdown mode is helpful and calming.  His favorite book right now is Oh No, George!  We have renewed it from the library as much as possible, so I should just break down and by it. I love listening to him "read" it by himself or with Bubby and me.

I have noticed Bubby trying to engage his little brother even more lately.  It doesn't always work - Bug typically just wants to parallel play or to just do his own thing altogether. But every once in awhile they "play" in the little kitchen together. Bubby loves cooking shows (sadly we don't have cable, so no FoodNetwork unless we are watching at Babushka's), but we do watch Master Chef. These shows inspire Bubby to create his own "recipes" with the felt food and other play items.  When we ask what Bugaboo is making, he  always says,  "chips and salsa," "tacos," and occasionally, "coffee." 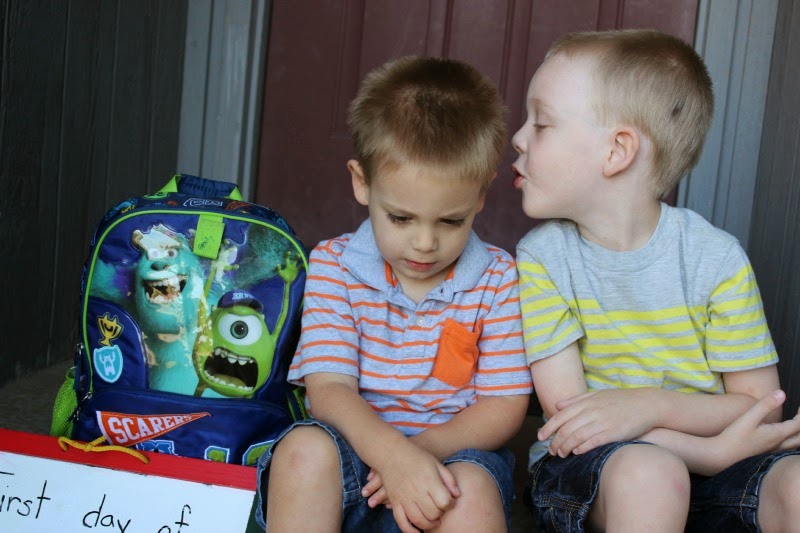 My favorite moment of today was when The Hubs was getting ready for work. I was in the middle of something, and out of the corner of my eye I see Bubby leading his little brother by the arm. "Bugaboo! We're going on an adventure! We're going to sneak up on Mom and Dad!" Bug allowed Bubby to lead him for a little bit, but not for long since he doesn't like his hands/arms to be touched. Bubby was sad that his little brother didn't want to play with him, and tried a few more times without much success. Several times today I heard him say, "Come play in here with me, Bug." or "Come do this with me!" Most of the time Bugaboo continues ignoring him, and that is hard for the big brother. I am thankful that Bubby wants to play with his little brother. Most big brothers (or sisters) don't seek that out, which may be why it is simultaneously heart-warming and heart-breaking for me during these "Let's play together" moments.

But this is the life we have been given, and I really can't imagine it any other way. I prayed when I was pregnant with Bugaboo that the boys would be good friends. And they are. They are good friends and good brothers to each other.  At the end of the day, they both sat on the couch laughing and smiling at our new DVD, Celery Night Fever, looking like very typical brothers. And in their own way, they are - atypical typical brothers.
Posted by Amanda MacB at 10:34 PM 2 comments: Links to this post

Linking up with Five Minute Friday tonight. The rules are simple. Free write for five minutes on the topic given (this week is "change.") No editing, over-thinking, worrying about grammar, etc. Just writing. And linking up here. Then comment on the person's post that is ahead of yours.

"The more things change, the more they stay the same."

This is my fifth year being a stay-at-home mom, and as much as I have been thankful for it and loved it, I can honestly say that the last couple of weeks of being stay-at-home-mom-and-teacher-again have revived my weary heart. The worst thing (for me) of being a stay-at-home mom is never feeling like I was accomplishing anything.  Laundry. Dishes, Meals. Vacuum. Groceries. Repeat. Nothing ever felt done, no matter how many checklists and schedules I tried. But the last couple of weeks I feel like I have accomplished things. I planned lessons. I taught. I created. I saw lightbulb moments. I brainstormed with friends making their own curriculum decisions. I have felt completely in my element again, and it is a wonderful gift. 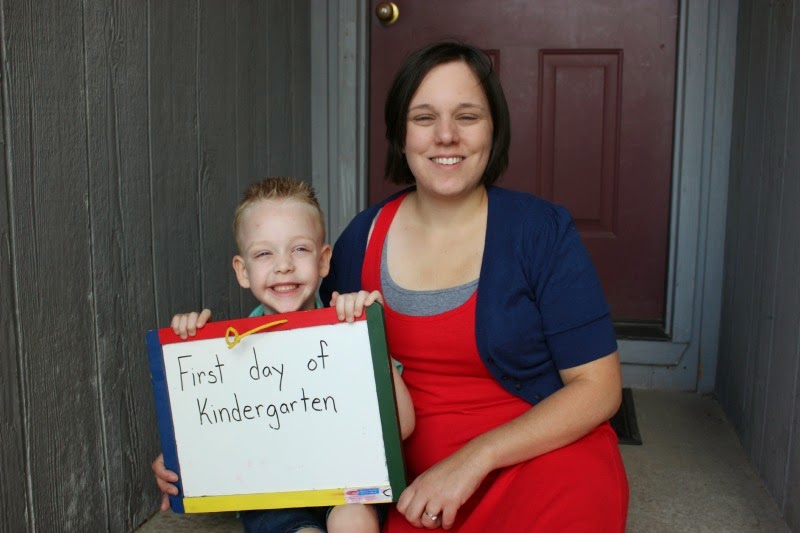 It is not easy. In two weeks of school there have been two days when I have very much thought, "I have made the wrong decision." But at the end of the day, I am tired, a very good tired.  That back-to-school-tired I have missed so much the last few years.

Some people connect with God when they run or when they write or when they paint.  But I have found a connection I had been missing since I left the classroom. I love to teach. And though my classroom is now a kitchen table and a sofa, things really haven't changed. I love being a mom, and I love being a teacher. (And I love being in charge of all the things! .... But that is a post for another day!)

I blinked, and it was over. The day I had been anticipating in some ways since we found out we were having a baby. The week I definitely had been planning for and thinking about since we decided that I would teach our oldest. The first week of kindergarten. I will never have another first week of kindergarten with Bubby again. It's a humbling truth. 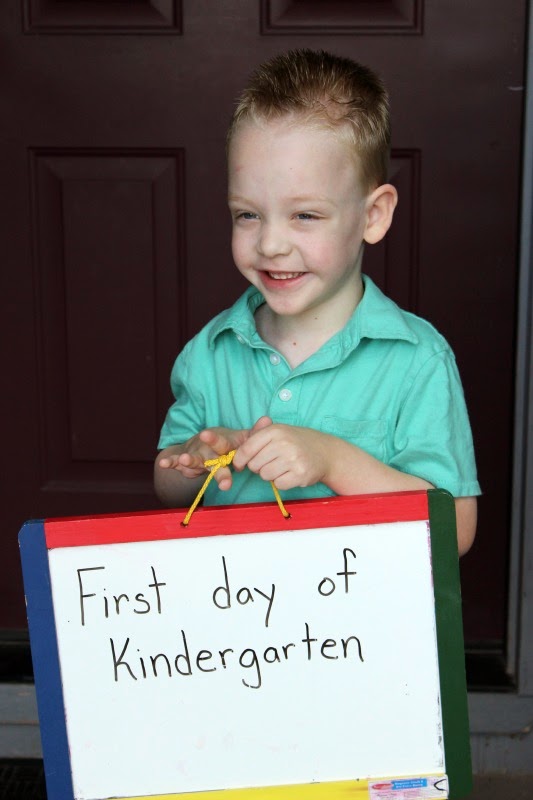 In the same way, my youngest's first morning at preschool went by in a flash, too. I had been fearing it, dreading it since we decided our first choice of preschool may not benefit him the most. We signed the papers for the school that made sense to our heads but hurt our hearts. I dropped him off, picked him up, and read the first note that said, "He had a great day!" My heart was glad for him but also a little sad for me. 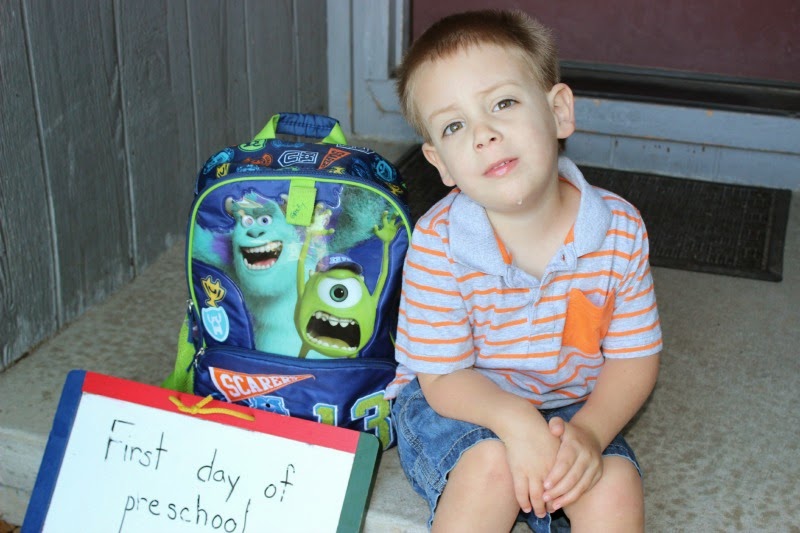 We are told all of the time how quickly life flies by, and it seems to have sped up now that I'm a mother. (Except those nights of babyhood or those times still when someone is up for hours from midnight to 4 AM. Time does not speed by then.) I want to encourage my children to be more independent, to discover new things, to grow and to learn. But at the same time I want to hold them at this age forever, where I can still mostly protect them from things and have them close to me.  It is a strange thing, motherhood and time. 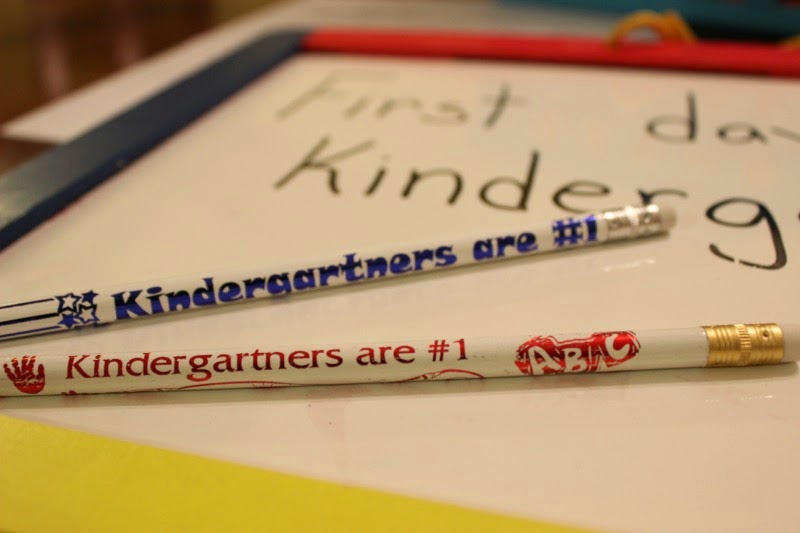 My own back-to-school days both as student and teacher don't really seem that far away. The ABC circles in my kindergarten room, being chosen first for math board races in first grade, the teacher with the stegosaurus puppet named Stego, the teacher who threw the Wordly Wise book... saying good-bye to my mom and Mimi and Papa in Walther Halll. The first time I stood beside a classroom door with my name written at the top: "Miller 109." I was told about a three dozen times that year, in English and in Spanish, "You look too young to be a teacher."

Back to school makes me feel all sorts of emotions, and this year is no exception.

(What did you DO all week? Find a lengthy recap here.)

Posted by Amanda MacB at 8:56 AM No comments: Links to this post