We drove around after church yesterday, through a couple of little towns outside of where we live. On a main street in one town we saw a couple walking their pig. That and some other things about the town made me feel like I was in an Ozarks' version of Stars Hollow. To make that Gilmore Girls reference even more complete, a deer almost hit us on the way home.  (But she didn't.) . . . And I digress . . .

The Hubs had a major test to keep studying for, so we didn't have a ton of time, but we made some time.  The boys were content in their carseats. For about thirty minutes we talked about what might be ahead in another eighteen months. We talked about what might not be ahead, too because once upon a time we thought we would only be where we are for four or five years. But it has been eight and a half now, and the earliest we will leave with our newest commitment will be at ten years. We are somewhat comfortable because things are familiar, but we are also feeling a bit pinched and restless because this was not our plan.

These days I often find myself wondering what that even means. . .  "Our plan?" 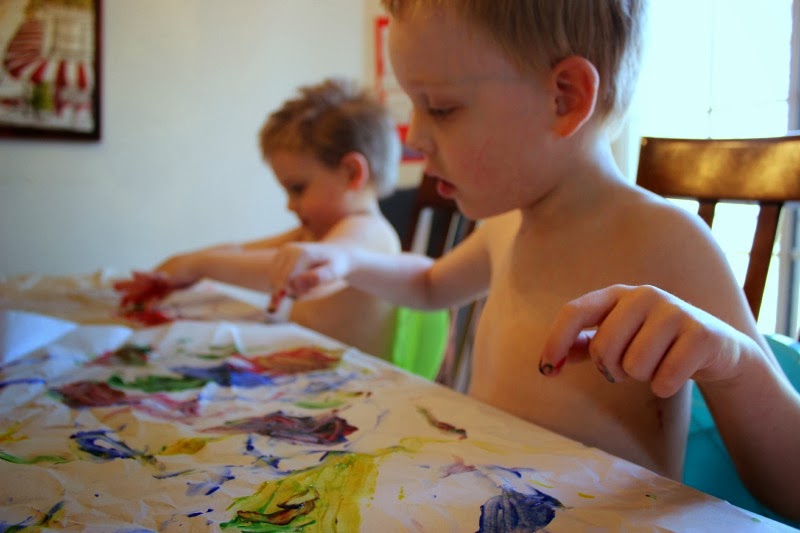 The days and the weeks blur together, extremely long and also all too short. On Saturday I sat on our driveway with the boys and a box of chalk. The Hubs came out and helped with the bubble wand, and I attempted to teach Bubby the art of hopscotch. Then I promised him in another year or two I would teach him how to play four-square.  Just the words four-square bring back wonderful memories of elementary school recess. My friends and I would run on the blacktop to get a square so that we wouldn't have to share a square with the boys. I didn't excel at any sport. In fact, I didn't attempt many sports, but I could hold my own at four-square. Somehow that still makes me happy,  twenty-plus years later. 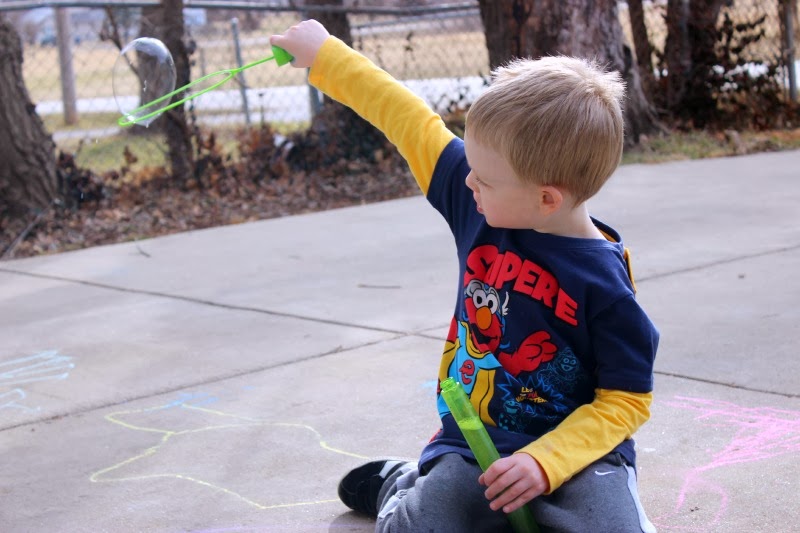 Lately in the in-between moments I find myself holding Bugaboo, who is crying for unknown reasons. Inconsolable.  It is almost like he used to be at bedtime for all of those months, but now it is at random times during the day. I hold him. I pat his back. I sing. I pray. I stay silent.  When he isn't having these crying spells, he is a happy and easy going boy. He keeps making his lists of names or shows or songs, adding a few here and there, taking one away for awhile.  I have now started saying full sentences to him  with the words when he lists, trying to get him to repeat and make a complete thought. Once in awhile he does. But usually he sticks to listing.

A new list appeared this weekend.  "6...7...8...9...10...11...12...13" An outsider may have had a hard time with his struggling articulation, but it was there. On his own while I was driving he said it.  I tried to have him do it again with me, but he refused.  Then later I heard him counting in his room.  But today he actually cooperated and counted with me. That mysterious, wonderful mind keeps me guessing. What else is in there to unlock, little boy? Help me find the right keys. 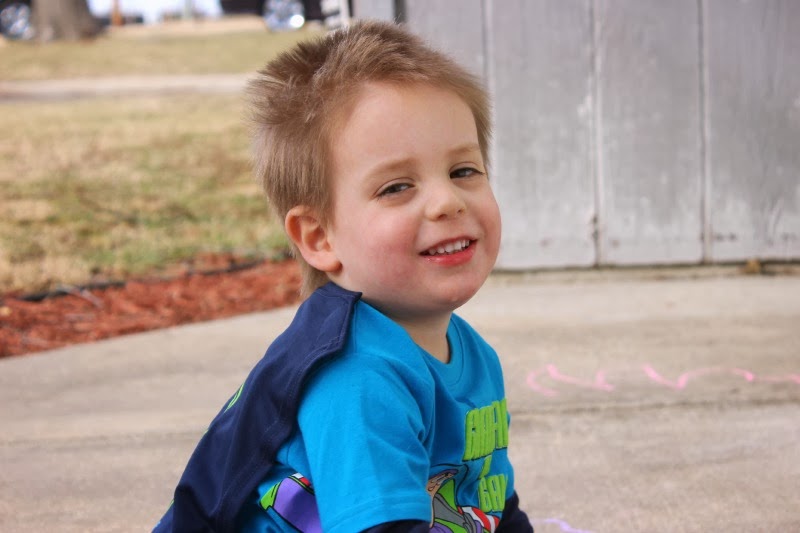 As spring approaches (I hope, please come soon, Spring) I keep getting this  phrase in my head, "Bloom where you are planted."  I want to argue with this cliche'.  But I can't. We are here, still, so I have some choices to make and an attitude to adjust.  There's so much more I still want, need, have to say. Nothing earth-shattering, just little decisions here and there, and the process of processing still more. I hope to find the right words soon.

Posted by Amanda MacB at 9:46 PM 6 comments: Links to this post

updates, faith, and my word "quiet"

My word for the year is quiet, and I am finding myself quieter than usual with my blogging lately.  It is not because I have nothing to say. It is because I have much to say, yet I can't find (or sometimes don't want to find) the words.

We are in a beautiful and confusing and exhausting place right now. But mostly exhausting. I think my poor husband maybe gets four hours of sleep some nights between work, homework and going to school/clinicals.  I don't know how does it all, but he does. (And he is not even cranky. Seriously. I am a lucky woman.) It also looks like we have some answers about the next year or more, which is a good thing, but also a weird thing.

Bubby is a challenge in ways that are not "your typical boy." I don't have to worry about him throwing rocks or biting his brother. However, he is my child and by that I mean his mouth gets him in trouble.  Yet at the same time, his mouth projects some of the most profound questions and sincere faith that I think a person can have. By him, I am reminded of all of Jesus' words on becoming like a child, having faith like a child, and not being a stumbling block to little ones. The hardest, yet most effective discipleship program I have ever had is becoming a mother. 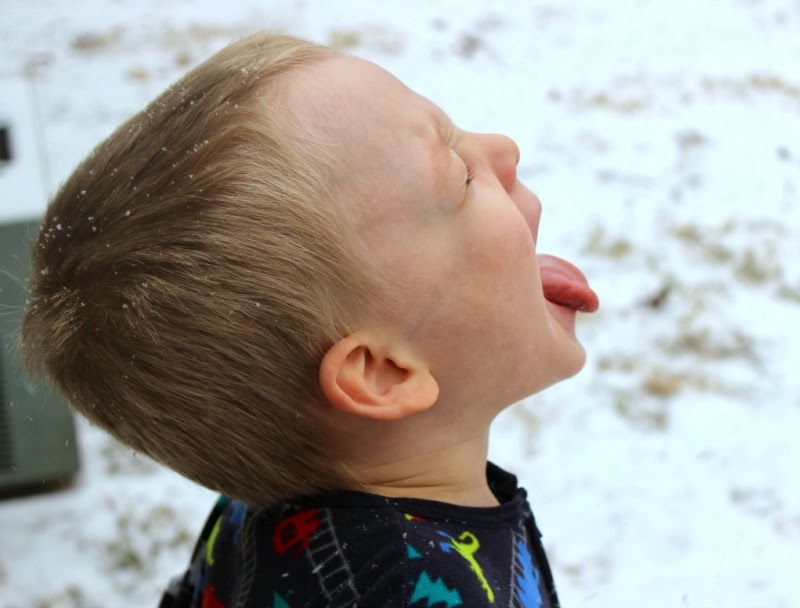 Bugaboo amazes us with some of the things he knows or picks up on, but we are still struggling so much with unlocking the key to better communication. His new thing has been crying spells. Beyond the typical two and three year old type tantrums that are easy to figure out, he also cries for unknown reasons. These times are heartbreaking and zap me of all energy.  During these crying spells he cries out for Jesus, and I don't quite know what to make of that. But as I'm holding him trying to calm him down, I find my heart (and sometimes my mouth) crying out for Jesus, too. 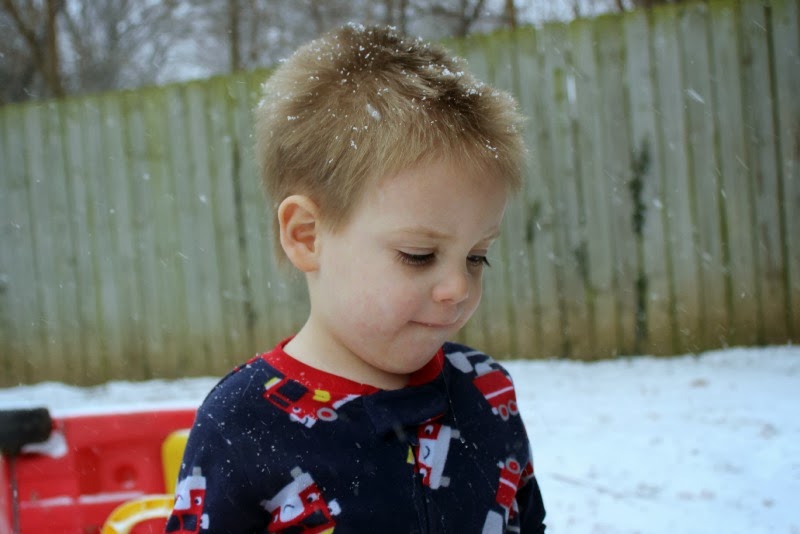 There is much in my heart and in my home these days, even if I do not write about it.  Bubby cracks me up almost daily with the things he says.  Bug's newest thing has been to grab my face in his hands and give me a kiss - which really is just slobbering all over my face instead actually puckering up.  The Hubs and I keep putting one foot in front of the other each day, and we find moments when we laugh about something the boys do or an old inside joke. We rent a DVD on some Friday nights and just sit for a couple of hours, or we grab a cup of coffee on Thursday morning after preschool drop off.  By the grace of God we are making this adventure work. And there is a light at the end of this nursing school tunnel.

I try to hang on to the fact that God has a plan for us, that He is at work even when I don't understand it. I don't say that because I have faith or parenting or life in general figured out. I do not. I regularly have to remind myself that He will work this out for good because He loves us and we are called according to His purposes.  I am leaning into verses like that these days because without this faith I have found, I will come crashing down.
Posted by Amanda MacB at 10:05 PM 1 comment: Links to this post

the marriage letters - "once upon a time"

Joining with Amber at the RunAMuck for her marriage letters prompts again. I'm so glad she brought these back!

Nine years ago we decided not to wait until July 9, but instead to just go ahead and elope. I wore a red and black dress, and you wore what you wore, and there is not one single picture of the event - only the picture of the day before of us outside after church when we were hanging out at your mom's. We had no idea what we were getting into. How could we? We had spent most of our seven-ish month relationship purchasing phone cards to call each other from across a continent and an ocean. We had really only spent less than three weeks together in person. Crazy kids.

But we took the plunge. Those first few months you applied to college and corrected my math papers and cleaned our apartment while I wrapped up my second year teaching fourth graders. We had Chili Pepper burritos at least once a week, and our dates included a walk in the Arizona heat around the new outdoor mall and then a stop into Barnes and Noble for a book and a frappuccino.  We fought, we floundered, and we forgave those first several months, trying to figure out how to live this life together.

Then we packed up our stuff, had our originally planned wedding, and drove thirty or so hours back to the Midwest, We felt so poor - you in school, and me spending an hour each way to go to a teaching job I hated that first year. I was depressed, but you persevered for both of us, and somehow we came out on the other side okay. Every piece of baggage I brought with me, you helped me unpack. And even when I feared you would leave or when I threatened to leave - because that is what I knew of marriage - you stayed.

Sometimes when I look back on the first couple of years, I just remember the freedom we had to go to the movies or dinners not worrying about feeding two other human beings. I remember our sweet Ebby dog riding in the car with us to visit my family in Illinois, her head sticking out every time you would roll down the window.  I remember thinking it was soooo hard to  have a husband in school ,but look at us now! Somehow we are surviving you in school and working and me at home with two children. Nine years ago the very thought of it would have sent me to bed with my covers pulled over my head.

We had no idea what we were doing over nine years ago. We knew that we loved each other, and we loved Jesus, and we had a plan for what life would look like. Naivety at its finest. But I'm so glad I didn't really have a clue. I'm so glad I got to marry you.

Love,
Amanda
Posted by Amanda MacB at 11:33 AM 4 comments: Links to this post

on the day you would have been five

It's Groundhog Day again, and you would be five today if everything had gone according "to plan."

But instead all I have of you is a black and white picture of fuzziness where there used to exist someone the size of a grain of rice.

I thought of you a few times as the boys were keeping me busy today. I was thinking how much you would love them and how they would love you. Except in all actuality if you were here, one of them (or both of them) would not be. And who knows how our lives would look if you had arrived.

Once again this is such a weird day for me.

Each year it causes a little less pain to think of you because life is okay here, and I know you are even more than okay where you are. Still, I can't help but wonder a little bit about what you would have looked like and who you would have been.

But deep down I know exactly who you are. You are my child, and I love you.
Posted by Amanda MacB at 9:58 PM No comments: Links to this post