(in the morning in the car)

"You stress me out!" Bubby hollered from the backseat a few minutes before we needed to be home for Bugaboo's therapy appointment.

"How do I stress you out?" I asked trying to figure out where he picked up that phrase. Ah yes, when the dog ran away this morning, I yelled that to her when I finally dragged her back in the house.

"Because you say bad words to me." he replied.

"What bad words did I say to you?" I kept driving trying to think of what could be perceived as a bad word to my four year old.


(in the afternoon in the car)

Amid his non-stop talking about everything under the sun came his little voice asking, "How big is God? As big as a semi-truck?"

"Urghh! I am NEVER going to get baptized." This was said with a tone of disappointment rather than a declaration.

"Why do you want to get baptized?"

"Because I am following Jesus." he said decidedly.

"What does that mean to you?" I asked.

"Can you turn up the song?"

While at the park today the boys were playing on some of the smaller equipment. There were just a handful of toddlers and preschoolers. All of the other moms that were there were not actually on the playground area with their children. They were on benches.

Playing on equipment is something his therapists recommend. Easier said than done. Bubby went up and down slides while I helped Bug navigate the stairs.In order to catch him at the bottom, I would rush around once he was situated at the top.  This can be somewhat tricky depending on the piece of equipment.  It was a little bit frustrating because the other  children at the park had no regard for Bug.  While I was down at the bottom of the slide, I heard Bubby call out to an aggressive preschooler, "Don't push my brother down the slide!" The child ignored Bubby and proceeded to try to knock Bug down the slide so he could have his turn. (I was there so Bug was not hurt.)  We kept trying to move to different parts of the playground, but each time this handful of preschoolers and their mothers would show up a minute later. Then their kids would take over again. 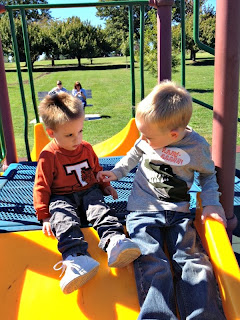 I was a bit frustrated because it was very obvious that our trip to the playground was not as easy as theirs. I have never once been able to just sit at a playground and be oblivious to what my kids are doing. Part of me was slightly jealous at the sight of the bench-dwelling moms, but then I remembered the gifts I was given even in that trying moment.

I get to help my son use the slide.  Bug going down it independently will be a milestone, a celebration instead of something common place that most take for granted.. I get to see Bubby stand up for his brother - not because I told him to do it, but because somewhere in his four-year old mind he already knows it is the right thing to do. There are gifts even in the frustrating moments.  All is grace.
Posted by Amanda MacB at 9:19 PM