The boys slept in - Bubby slept in so long and hard that he didn't even hear Bugaboo playing with toys in their shared room.  He shuffled out of their room in his footie jammies after nine o'clock and asked, "What's going on?" We hurried to Aldi to do grocery shopping before a promised donut to the boys if they were good. Two out of three of us wore SuperHero hoodies complete with capes. I have to say there is nothing quite like buckling Batman into his carseat, with his eye-holes down past his nose.

At store number two I forgot the toilet paper I needed to buy, and there were no driving carts for the boys.  The meltdown was avoided until we got home, after which Bubby ended up on the rug for general sassy-ness and his new habit of spitting. It is always odd to have to discipline my child who acts exactly like me, even down to the way I could see him wanting to throw his shoe off while he was on the rug. I was a big shoe thrower back in my childhood. I can actually remember the way it would sail across my bedroom to hit the door.  Bubby was slowed down by his four year old coordination, and I stifled a laugh as I saw his plan of shoe-throwing thwarted. (For the record he inherited much of his personality - good and bad - from me. Sassy-ness? That's me. But the spitting? No idea.)

At one point today the dog came to the backdoor with a feather in her mouth. However, I did not find a bird anywhere in the yard.  For that I am thankful (I think). The rest of the day carried on as usual: Laundry folding. Lunch making. A half-done easy art project. General mess cleaning up. An after lunch movie and lots of Duplo and train playing. 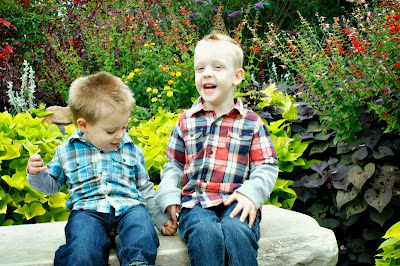 I made an apple crisp while the boys were occupied. We may have chosen to have that for dinner before soccer practice, and saved the pasta I made until right before bedtime. I pushed the sit-and-stand stroller loaded down with two boys, a lawn chair, a blanket, a soccer ball, and my purse across a school playground and field and then back to the car again after practice and called that today's workout.

Not every day is like this one, I know. But maybe there are more days like this one every week. I just need to take the time to notice them.
Posted by Amanda MacB at 10:31 PM