But I don't want to be a pirate!

These are my sweet boys barely sitting still on the couch for a picture.  We were headed to an early night of trick-or-treat at the zoo. 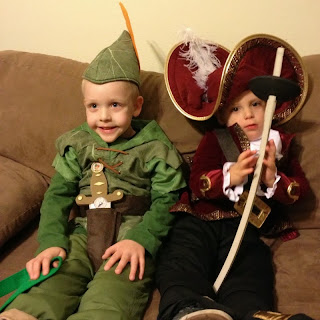 What this picture doesn't really show:

But by the grace of God I was eventually able to suck it up and enjoy walking around a zoo in 40 degree weather. The Hubs pushed Peter Pan and Captain Hook around in a sit-n-stand stroller. We collected about twenty pieces of candy. We discovered the boys like Smarties which means more chocolate for mommy (win-win). At the end of the night Bubby declared, "Everybody LOVED my costume!" because when you're four the world is a magical place that sometimes feels like it is all about you.  And sometimes that is exactly how it needs to be.
Posted by Amanda MacB at 9:44 PM