He stands on the field in the middle of practice. It's the second week of prek/K fall soccer. I see his arms go up alternately wiping away tears, and I see his face quietly crying.  His little brother is on my lap in the grass on the sidelines, and I am not quite sure what has happened. Bubby just stands there near the end of a drill with tears coming down his face.  I try to motion him to come over to me. He looks lost and frightened, and every ounce of me wants to run onto that field and scoop him up. But I'm not sure if I should do that, so I keep motioning to him, these seconds feeling like hours.

The coach, not knowing that one of her players is crying, tells everyone to go get a drink. I'm thankful and relieved by the timing of that. Bubby runs over to me, and he's saying something I don't understand through the tears.

The kids on the team this season are sassy. Sassy to the coach. Sassy to their parents. There are actually two teams practicing together tonight, and it seems worse than last week.  We have a new coach this fall, and I'm not sure she knows my son's name yet. She is louder than last spring's coach and has the sarcasm of a middle school teacher.

I want to tell Bubby that we can just go. But is that what I am supposed to say? I was not an athlete, and I don't come from a sports-playing family. I played softball in third and fourth grade. I loved it in third grade because it was fun, and we had a great coach. It was not as fun in fourth grade, so I didn't sign up again the next year.  I didn't even attempt sports once I got to middle school. Who needed extra rejection and embarrassment?

My son is so much like me in how he thinks and acts. Therefore, I think I know why he is crying though I lack evidence and specifics.  I have to internally tell myself to hold it together and not start crying, too. 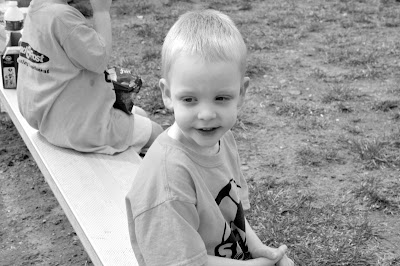 I give him some water, and ask again if I can help or if he can tell me why he is crying.  The tears have almost stopped now, but he still can't find the words. I ask if he thinks he can go back and finish playing, deciding I will encourage that, but if he doesn't want to, then we will leave.  He says he can go back, and he does.  He joins the kids and plays.  But the sadness and the timidity linger. I can see it in the way he runs.

About ten minutes later another little boy comes crying to his parents. He wants to go home, and it seems as if his reasons are similar to Bubby's. His parents can't get much out of him either, and he is crying loudly.  I look at my son out on the field.  There are two other boys knocking each other down on the field, and I see Bubby trying to avoid them.  He runs after the ball, but he holds back even more than usual.

This season is not going to be like last season, it appears.  A little bit of joy was stolen from my child tonight, and it is wrecking me to have not been able to have prevented it. And as I try to talk to my preschooler on the way home about the practice and his feelings, I wonder what I am supposed to do?
Posted by Amanda MacB at 9:50 PM