There is something therapeutic about making, baking, and eating homemade chocolate chip cookies. The four of us sat around the kitchen table before bedtime tonight, two of us in matching Sleepy Monster pajamas. I couldn't help put just breathe for a minute and remember that life is good. 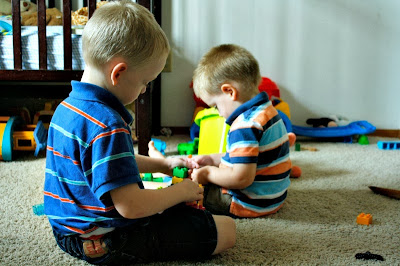 It has been a long week. On the heels of last week's appointment, we made a follow-up with our local neurologist which was not helpful, Instead it was incredibly frustrating.  It was also on the way to that appointment that Bugaboo had a blow-out. If I believed in omens, that would have been ours for the day. The few minutes we spent with our neurologist was the complete opposite of our time last week with different doctors. Driving home all I wanted to do was cry.  Instead, I composed myself and sent a message to the experts who had offered to help us. Then I did my best to finish the day which happened to include an activity night at Bubby's preschool followed by a much needed pizza.

I don't remember an eloquent or specific prayer, but I do remember flopping on our bed in a state of complete exhaustion last night. A few of my friends had given me some ideas on where to go next with Bugaboo, but I needed clarity.  I think I may have prayed something like, "God, help," knowing that He knew exactly what I needed help with though I did not have the words. Two years of doctors and appointments and researching have taken their toll. Sometimes I believe the Spirit intercedes audibly for us, but last night I think the Spirit interceded while I just let go and went to sleep.

Less than twenty-four hours later I had an answer in an email. The place we went last week is currently without a pediatric neurologist on site. So we could see their former one privately or have them refer us to Kansas City or St. Louis. Friends, a nurse, and one of our therapists have told us to go to St. Louis, so that is what I picked.

I'm sitting here trying to figure out how to wrap this all up. I wish there was some nice little happily ever after, but we are still in process. I don't know what battles we still have to fight, and honestly, I am tired. But I do know that I am given enough to get through each day, and most days I am given more than enough. A surprise gift arrived in the mail the other day, just for me, from a father-figure. A friend took the boys to the park while I attempted to get some rest. The boys and I sang together as we went from one end of town to the other.  Another friend came to visit on her afternoon off. Bubby wanted to work with Bugaboo on Bug's first memory verse, and after having him repeat each word, he told his little brother, "Good job!"

And of course the best news was our most recent answer to prayer. The prayer I barely managed to say, but God in His grace, answered almost immediately. We are getting a referral to a place that will hopefully offer some more help and insight for us for Bugaboo. We have enough.