I don't really want to think about it.

But what have I learned this month? (linking with Emily @ chattingatthesky)

1. The library is awesome all year-round, but once again we are enjoying the benefits of the summer reading program. So far we have enjoyed free ice cream and pizza off of the flipcard.  And I need to turn in the boys' chart again because we have now earned a "pay mommy's library fines" certificate. If only I lived in land where there are no library fines, like my friend, Kelly.

2. I am trying to learn to run. I still do a lot of walking. It isn't pretty. I don't go very far. But I am off of my couch. And I kind of like it. I hate it, but I also kind of like it.  I like when I push myself 30 more seconds - in my head I can hear Jillian Michaels screaming at me to take my hands off of the bar of the treadmill. But lucky for me, Jillian is not really there - so I only push myself 30 seconds and I keep my hands on the bar most of the time so that I do not fall  off of the treadmill.  I may learn to run at some point, but I will never be coordinated.

3. Tonight I learned what broccoli rabe and tumeric are. Next month we are trying "clean eating" for our dinners. I had to google about ten ingredients on the list.  There wasn't a "can of cream of mushroom" anywhere on the list. There wasn't cheddar cheese. There wasn't mac'n'cheese.  Hold me.

4. Having a new, house-trained, big dog is a blessing. The kids love her. (Well, Bubby mostly - Bugaboo loves her from a distance so that he is not licked.) I feel safe in the house with her around. But I do not love the fur. I forgot about fur. I am vacuuming everyday now.  But she eats all of the spills on the floor - so I think I will be scrubbing the floors less. That's an even trade, right? 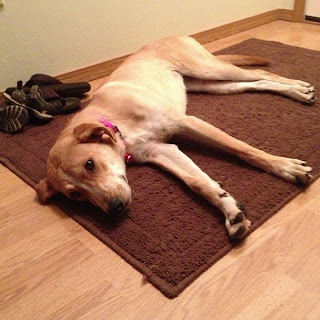 5. My four year old is independent.  Not only did he do VBS at our church without tears, he also went to a VBS without me being there at his "preschool church." Last year he cried at least half of the VBS days, and I was there. What a difference a year makes.

6. Watching 80s movies is a free and fun thing to do on some summer nights.  Let it also be known that the dream sequence in The Burbs is just as disturbing now as it was over two decades ago.

7. I did not take very many pictures this month. I will regret that in the future, but sometimes laziness wins.  And I have to remember that my parents did not document every moment of my life with a camera, so my boys won't need too much therapy if I don't have any pictures of them just doing normal things from June 2013.
Posted by Amanda MacB at 10:19 PM