Bugaboo is fascinated with stop signs.

"Ohhhhh. Peeee." he has been saying for weeks now, especially at the one right before we turn onto the main road.  And now he is finding O and P in books with some pretty surprising accuracy. Occasionally he calls out an S and a T. Even if he doesn't get the letter right, he is realizing that these symbols have one of the alphabet names. It is the strangest, most wonderful thing.

Every time we drive by the most favorite ice cream place in town, no matter which one it is of the four locations, he yells out, "I-cree!"  He also sees the Starbucks mermaid (is she a mermaid?) and yells, "Foffee!" There are things turning in his brain, but the way things come out sometimes baffle and confuse us. Sometimes they surprise and delight us. 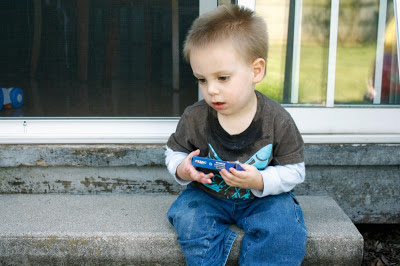 On the nights where he's not in my arms fighting sleep for an hour or two, he falls asleep in his crib with a book under his arm, just like his big brother. Bug still doesn't understand taking a bite of a chip or a banana or a piece of toast. When you ask him his name, he gives you his brother's instead. We are still dealing with fits where his lack of communication skills leaves us feeling helpless and sad. He doesn't scream out in pain when something has smashed his finger.  Instead I have to notice something is wrong and help him before he gets seriously hurt. His drooling that had disappeared for a couple weeks has been back recently with a vengeance.

But this S.T.O.P. - this is really a sign of hope for us. A sign that maybe we are going somewhere unexpected.
Posted by Amanda MacB at 11:40 PM