Spring Break for The Hubs is over. Illini lost (was robbed) tonight in March Madness. And I can't tell you exactly what we've been up too this week or why I haven't blogged. I fought the crankies one day, but deep down I know that life around here is good.

This boy loves the snow.  Here he is watching it fall a few days ago, and then playing in it bright and early one morning.  Not-quite-four is such a fun, fun, fun (but exhausting) age. The observations and questions never stop coming out of his mouth, except when we are around people he doesn't know well.  He says the most hilarious things, and today I watched him playing with his toys. Part of the dialog included Mr. Potato Head telling Mrs. Potato Head, "Be quiet, or I'll throw you into the furnace!"  Apparently we have watched a certain Veggie Tale dvd too much.  I need to catch up on all of the wonderful things that come out of his brain. It is never a dull moment around here, but he is so sweet to his little brother - another protector and advocate for Bugaboo, but mostly just his friend. 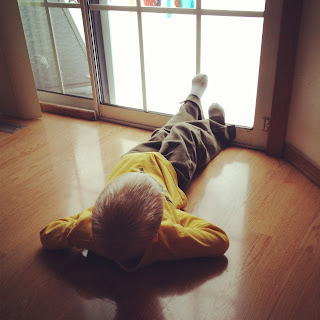 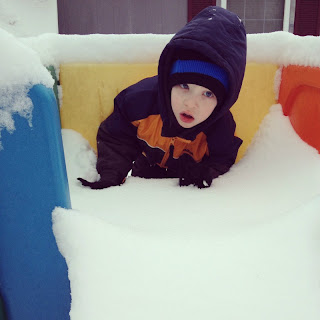 Bugaboo is still such a snugly little guy, except when he is on the move.  We hear him singing random songs at bedtime or just while we are playing. He doesn't have words, but he has the tunes.  He likes The Bunny Song from the aforementioned Veggie episode.  This week he is working on not putting his hands in his mouth while chewing - because that really meant he wasn't using his tongue and other mouth muscles.  This is not a fun thing, and lunch today was a battle of wills between him and The Hubs.  It is amazing what we take for granted -like not having to teach (some of) our children how to use their tongue and back teeth and jaw to really chew.  I did manage to catch him at a happy and messy mealtime, as well as amidst a post-lunch wardrobe change. 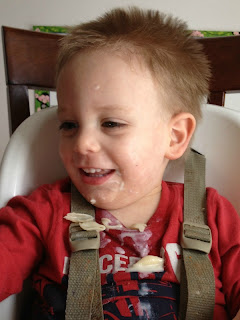 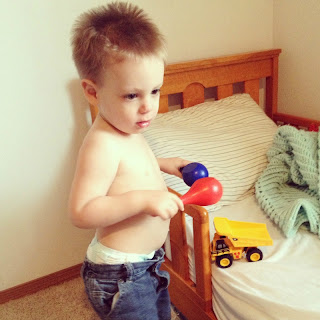 And today we braved the snow to get to church.  Bubby joined the other kids in coming in during the second song waving palm branches. He looked so cute walking in, but we sat on the wrong side from where he was so I didn't get a picture.  Later during more singing back at our seats he kept lifting his branches high in the air. I said, "Bubby you need to put those down." And he told me, "They told me to lift them high."  I couldn't really argue with that, but he did manage to keep them under control.  He doesn't understand we are Baptist and not charismatic now.

We didn't sing my favorite Palm Sunday song at our new church, so I had to sing it on the drive home. Bugaboo got the hang of it. 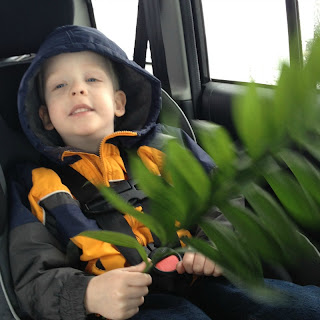 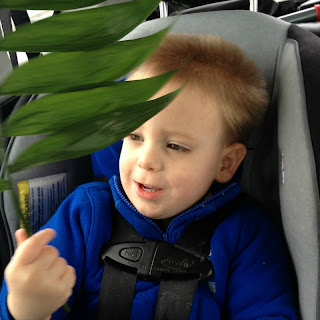 And this is what it looks like when your preschooler gets his palm branch taken away: 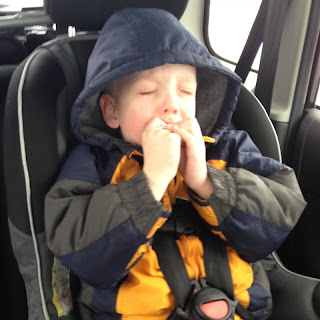 The best part of that moment is he noticed I was taking his picture, and through his tears he said, "Cheese."  Yes, we were cracking up in the front seat because that's the kind of parents we are.

And finally a naptime picture and a selfie because Bubby had to have his picture taken again but he wanted to "see it in the box." Hence the fuzziness. 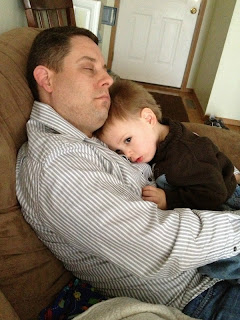 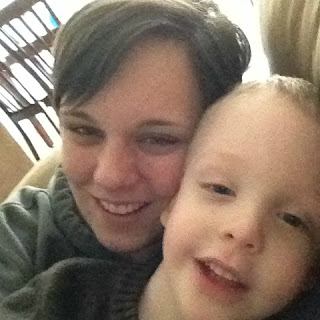 Life is pretty good around here.
Posted by Amanda MacB at 11:29 PM