getting Jack Bauer-like before the snowstorm

All of the buzz around here is the storm we are supposed to get this evening into tomorrow. Somewhere in my mind I had told myself this is no big deal until I heard everyone on Facebook  discussing ice.  Six years ago we had a horrible ice storm in which we were left without power for days.  Back then we just had dogs. Nice, warm, furry dogs.  Now we have babies.  So this morning, an hour or so before preschool, I freaked out. 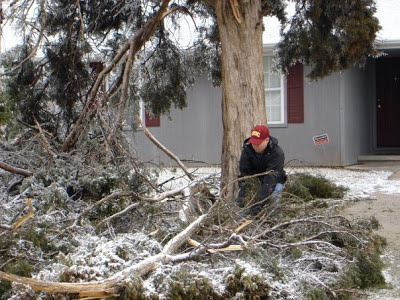 First I dashed into Walgreens because of its location for diapers and candles.  Dash is a relative term since I was hauling my not-easily-mobile two year old and my three and a half year old in a winter coat. Then we hit the grocery store because I needed sandwich supplies, a lifetime supply of milk, and juiceboxes incase our fridge/power goes out. Of course the most convenient store on the way to preschool is the most expensive - even though it's name implies otherwise.

It was the boys' lucky day because although I had said, "No car-cart today, boys" as we pulled into the lot, there in the cart corral inside was the beloved car-cart. This one is nicer than our usual grocery stores - one which does not have car-carts and one which has some really wonky car-carts.  I threw the boys in to their delight and ran through the aisles, with which I was not very familiar.  I am sure I said aloud many times, "This is a rip off!" as I threw a few items in.  But perhaps my complaints were drown out by the ker-plunk ker-plunk of my massive shopping cart.  All my years watching SuperMarket Sweep were paying off.

After checking out, we made our way to the van, which unfortunately was two spots from the corral.  I had already checked the time. Not good.  "We're running out of time!" I yelled in my best Jack Bauer voice.  At the last minute my preschooler had decided it was necessary to buckle himself into the seat.  As I yanked him out he lost his shoe.  "Just grab your shoe! Carry it! Don't put it on, carry it!" I yelled while carrying my two year old, two gallons of milk, a case of juice boxes, bread, bananas, and a big container of apple juice.  I thought to myself how all my years walking across the southside parking lot at Evangel with Wal-mart bags in had were now serving me well.

So after all of that - we better get some snow! (But hold the ice, please.)
Posted by Amanda MacB at 4:26 PM