Joining with The Gypsy Mama's group today to write for five minutes without editing on the topic "path."

Right now my two boys sit on the living room floor making a path out of brio train tracks. My youngest just pulls things out of the train basket while my oldest creates and destroys and creates again a path for his trains and cars.  He doesn't have very many tracks in his set yet, but I remember his uncle, my brother, creating paths all over the house, when he was just a couple of years older than what Bubby is now. 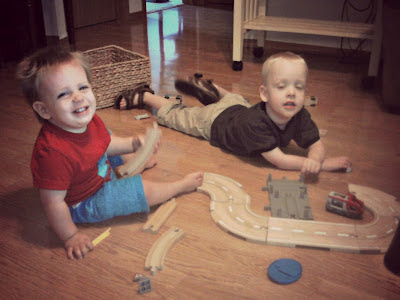 Who would have thought our paths would take us where we are now? My brother became a numbers guy - a responsible fellow with a wife and dog fixing up a house in our hometown after a brief stint in a town he swore he would never visit, let alone live in. My path went through some stops in various places, and is currently stopped in the land of mommy-hood.
I look at my babies with their wooden toys sprawled out before them, and I wonder, what does the future hold for them? For their friendship? For their education? What paths will be paved in front of their feet?