The Hubs and I stayed up till midnight talking last night. Serious stuff.  Serious, difficult, but not arguing/fighting. I think it was one of the best talks we have had in weeks, maybe months. I remember when we were "dating," and we would chat for hours till somebody's midnight (he was in England and I was in Arizona). When you get married, there is less chatting than during courtship.

When  you have two babies in two years and your husband is working and going to school you forget what a long conversation is.  It is a gift. I feel like a better person because I listened and was heard. Quality time is my love language, don't ya know, followed closely by words of affirmation.

In other news, Bugaboo has been trying for weeks to roll from back to front, and tonight as we were getting the boys ready for bed, he made it all the way over for the whole fam to witness.  Second children don't seem to get as much fanfare as firstborns, even as hard as mommy tries, so I was pretty pleased that this milestone happened for an audience of three. 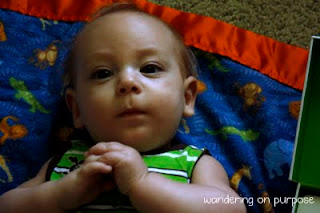 Today I made strawberry cream cheese muffins. I just had one. Okay, it was two. And I may have another when I'm through here.  They were pretty tasty, but the batter was heavenly when I had a spoonful (or two or three) from the bowl this afternoon.

I love muffins - the cupcake of breakfast.
Posted by Amanda MacB at 9:53 PM