... Bugaboo is sleeping in his crib in his shared room? He sleeps great in there except the last couple of days around 5 AM he wakes up with his foot stuck in the bars.  So then I feed him and he snuggles in back to sleep next to me. Bugaboo has been such a great sleeper that we didn't have to co-sleep like we ended up doing with Bubby, so the little bit of co-sleep time the last couple of mornings has not been bad at all.  Bubby hasn't seemed to notice that he has a roommate. 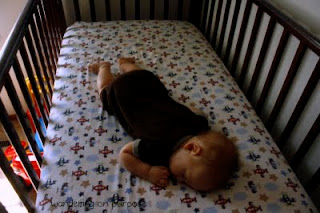 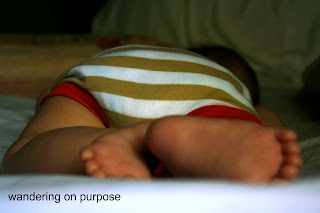 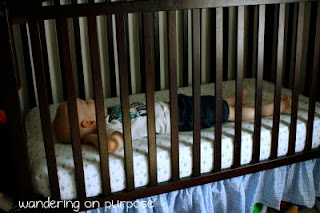 ... I should earn Mommy of the Year points because my just-turned-two-year old got to fingerpaint today?  At the kitchen table. With Bugaboo awake, not napping.  While The Hubs was in class. And I took pictures. 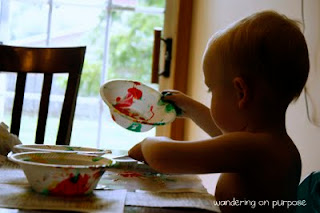 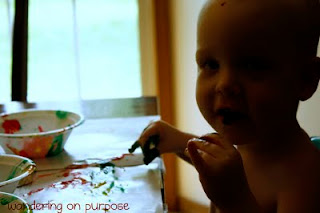 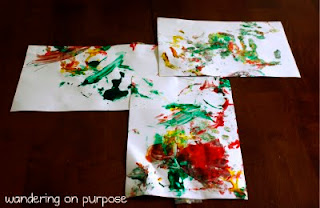 ... I should not earn Daughter/Daughter-in-law of the Year awards since Father's Day cards, though purchased on Tuesday, will be late due to a stamp/cards/thank you cards from Bubby's birthday all in different vehicles? Yes, the thank you notes have been ready for a week. I have a million excuses - but mainly because I have two kiddos I didn't want to drag into the post office for stamps.

--- I use fragments almost as much as run-ons in my blogging? Kinda funny for someone who once considered herself a grammar snob. Kinda.
Posted by Amanda MacB at 9:57 PM