Never ask your toddler, "Guess who's coming to see you in a little bit?"  unless you are prepared to deal with the consequences.
I asked Bubby this just minutes before his physical therapy/our IEP meeting today.  His answer was Babu. (what he calls my mom)
Wrong answer, kiddo. Grandma lives in Illinois and is teaching, which is difficult to explain to a 22-month old.  So he had a meltdown, crying, "Babu!  Baaaabuuuu!  Babu!" right when Miss Tara (the PT and the correct answer) and the service coordinator showed up on my doorstep.  Lovely.
Luckily he loves Miss Tara and was pretty excited to see her (though not as thrilled as he would have been to see some grandparents).
Other highlights of today's meeting included:
Oh - some educational hightlights: 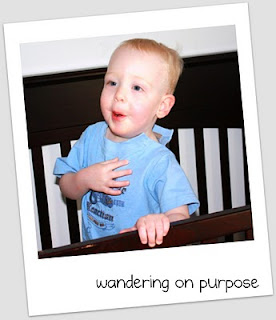