Ideally we would have waited a month or two before adopting another dog so quickly.  But Mac2.0 could be arriving anytime from the end of the month to mid-January.  And Bubby is looking for his doggie friend. And The Hubs works evenings (sometimes very late evenings with driving distances to go counsel), and it is semi-necessary for me to feel a bit protected in this neighborhood in which we live.  And we knew EbbyLou's time was coming to an end.
So we went to the Humane Society just to look and see.  We found two that met we liked - that were calm, that were not barking, that had a sweet-adopt-me-please-face.  One was only four months old, so we opted not to go with her.  We wanted about a year or two old and a female and not too big.  We found an eight month old.  She is an Aussie mix.  The Hubs yanked on her tail a few times to make sure she wouldn't snap if Bubby got a hold of her.  She didn't react.  She sniffed Bubby but was not hyper with him.  So we adopted her.  We pick her up later today after she has been fixed.
Here is the picture of her from online. 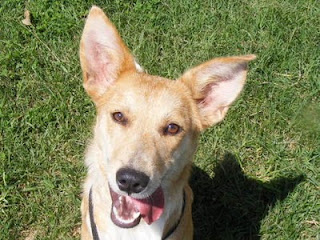 Apparently Aussies are very smart, easily trainable, and loyal/good with families.  They like playing and having a "job" to do.  We are either naming her Penny or Lucy.
Posted by Amanda MacB at 12:03 PM