a lesson in grace

Last night I read a beautiful post over at chattingatthesky (who is doing a series on 31 Days of Grace).  I was inspired, and even commented how I wanted to be a mom like that.
However, this morning I was anything but that.
I decided both bathrooms must be cleaned...immediately.  Now for the last several weeks they have been on minimal maintenance mode - clean enough to not spread disease but not clean enough to have my grandmothers or anyone else's grandmothers over.  I was sick of seeing the soap residue, the spots on the mirror, and the dust, among other things.  So I set off to clean with my baking soda, vinegar, Windex, and Lysol wipes, and Bubby followed.  That, my friends, is from which my frustration came.  He, being a typical almost-toddler, was in all of the drawers.  That would have been fine except he wanted to try to eat the candle, attempt to take things from the "child-proof-not-so-much" cabinet, and put his hands on the toilet bowl mid-clean.  And I kept saying "No!" and begging him to give me just ten more minutes to get the job done.  And I was stupid enough to proceed to the other bathroom and live out a similar scenario.  I did not yell, but I was definitely a cranky mama to a child who was just doing what is developmentally appropriate - explore and investigate.  I was anything but grace-filled as I prioritized cleaning and to-do over relationship and relaxation.  Who was this?  I rarely prioritize cleaning over anything.  Over the last year or so I have pretty much had the philosophy that housework can wait, and what gets done gets done. (Okay, I probably had that attitude pre-mommyhood!)  But every now and then I get tunnel vision, and when that happens, anything that interferes with my to-do list irriates me.
Once the bathrooms were clean enough (still not June Cleaver-worthy), I got Bubby dressed for the day which included zubbas on the belly and introducing him to one of the best October kids books (In A Dark, Dark Wood - which he LOVED!)  And it hit me amidst his giggles and smiles that my priorities were completely out of whack.  The bathrooms could have waited till this afternoon or tonight or tomorrow... I am a stay-at-home mom not to be a "housewife" but to be a MAMA. 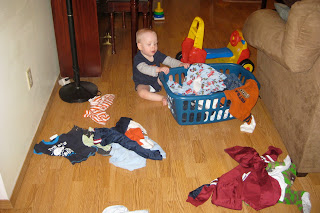 My one-year old extended grace to me today when I had not given him any during my cleaning frenzy.  He readily accepted the tickles and the storytime without holding a grudge against his previously-cranky mom.  And he gave me another gift that I defintely did not earn - my non-napper fell asleep on my lap just a few minutes ago - a rare treat, a morning nap.  Grace indeed.
Posted by Amanda MacB at 12:00 PM